USD/CAD snaps the recent series of higher highs and lows after struggling to test the August high (1.2949), and the exchange rate may consolidate ahead of the Federal Reserve interest rate decision as market participants brace for a potential shift in monetary policy.

USD/CAD appears to be unfazed by the federal election in Canada as Prime Minister Justin Trudeau secures his third term, but the pullback from the fresh monthly high (1.2896) may end up being short lived if the Federal Open Market Committee (FOMC) delivers an exit strategy.

Plans to start normalizing monetary policy should prop up USD/CAD as the Bank of Canada (BoC) insists that the Canadian economy “continues to require extraordinary monetary policy support,” and fresh forecasts from Fed officials may generate a more bullish fate for the US Dollar if the Summary of Economic Projections (SEP) show a steeper path for the federal funds rate.

In turn, USD/CAD may continue to trade to fresh yearly highs in the second half of 2021 as an inverse head-and-shoulders formation seems to be unfolding, but a further appreciation in the exchange rate may fuel the recent flip in retail sentiment like the behavior seen earlier during the previous month. 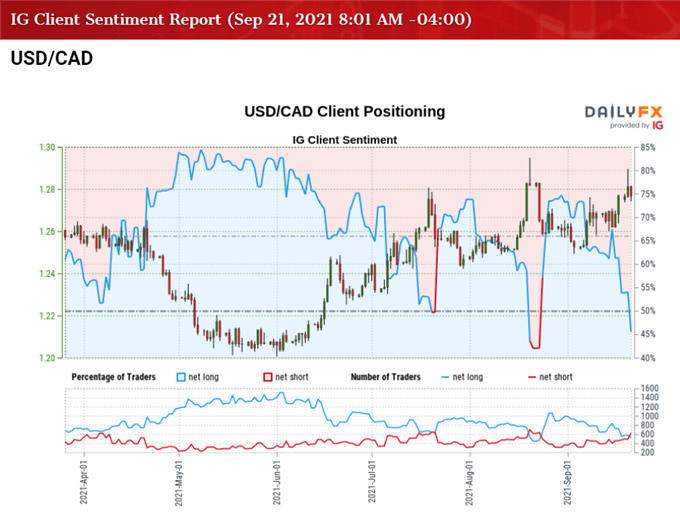 The IG Client Sentiment report shows 47.19% of traders are currently net-long USD/CAD, with the ratio of traders short to long standing at 1.12 to 1.

With that said, the break above the January high (1.2881) may continue to reflect a change in the broader trend as an inverse head-and-shoulders pattern takes shape, and the exchange rate may stage further attempts to test the August high (1.2949) if the FOMC changes the course for monetary policy.