US Dollar Pares Gains Despite Hawkish Tone in FOMC Minutes

US Dollar price action is coming under a bit of pressure during Wednesday afternoon trade. The broader DXY Index is now flat on the session after being up as much as 0.3% intraday. Downward pressure on the USD seems to coincide with the release of June 15-16 Fed meeting minutes just crossing market wires. It appears that the FOMC minutes, which arguably are backward looking and stale, have failed to fuel an extension of the US Dollar rally ignited by the risk of a hawkish shift in Fed policy three weeks ago.

The latest round of FOMC minutes noted how Fed officials “agreed to continue assessing the economy’s progress toward the Committee’s goals and to begin to discuss their plans for adjusting the path and composition of asset purchases.” Furthermore, the FOMC minutes indicated that “participants generally judged that, as a matter of prudent planning, it was important to be well positioned to reduce the pace of asset purchases, if appropriate, in response to unexpected economic developments, including faster-than-anticipated progress toward the Committee’s goals.” 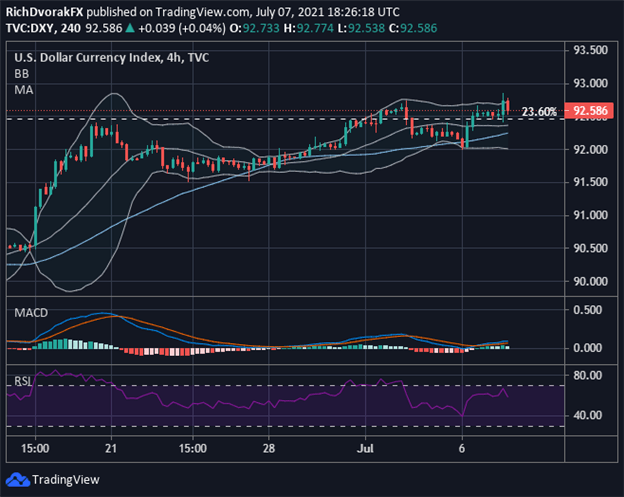 Not to mention, a “substantial majority of participants” stated how the risk to inflation outlook is tilted to the upside. This compares to only “a number of participants” highlighting the same concern in the April Fed meeting minutes. Most officials still expect the inflation jump to subside nonetheless. Also, to be fair, the FOMC appears to be in agreement that their “standard of ‘substantial further progress’ was generally seen as not having yet been met.”

That said, this all seems to reiterate what the market has already been expecting, and largely priced in already since the June Fed meeting. Relatively muted price action across the DXY Index, major stock indices, and Treasury bonds in response to the latest FOMC minutes support this narrative. Fading bullish momentum behind the US Dollar also suggests that the counter-trend rebound may have run its course. Traders thus might want to consider having the upcoming release of weekly initial jobless claims and CPI data due tomorrow and next Tuesday, respectively, as possible catalysts for volatility given their potential to sway the Fed taper debate.

Connect with @RichDvorakFX on Twitter for real-time market insight