Given the events over the last 24 hours, tonight’s RBNZ decision has gotten that bit more interesting and by that, I mean predicting the outcome has become more difficult. Heading into the meeting I had been leaning on the dovish hike outcome, meaning that the RBNZ would disappoint the very hawkish expectations, prompting the NZD to fall even with rates rising.

The rationale being that money markets had fully priced in a 25bps hike and even had a 20% probability of 50bps hike, not to mention the 65bps worth of tightening that had been priced in by the end of the year. In turn, this would set the bar very high for a hawkish surprise and thus a 25bps hike would have disappointed those calling for 50bps. A reminder, that when looking at trading central bank decisions a big part of the market reaction is in relation to market expectations.

How to Trade Forex News: An Introduction

That said, in light of headlines in the past 24 hours that NZ would go into lockdown on the back of “one” covid case being identified has now put even a 25bps hike in doubt, with money markets pricing in an 85% chance of a hike, while some analysts from Westpac and ASB expect the RBNZ to refrain from raising rates at the upcoming meeting. As such, with the NZD plunging 1.5%, the dovish hike scenario becomes a lot more tricky to trade on the basis that a 50bps hike has been taken off the table and market positioning is a lot shorter than previously had been the case.

What I think could happen at today’s meeting

The shock scenario would of course be “no rate hike and given market pricing, it cannot be completely dismissed. Therefore, should this scenario be realised, with short end rates still showing an 85% chance of a hike today, a decision not to raise rates is likely to see NZD/USD at risk of dropping to 0.6750. 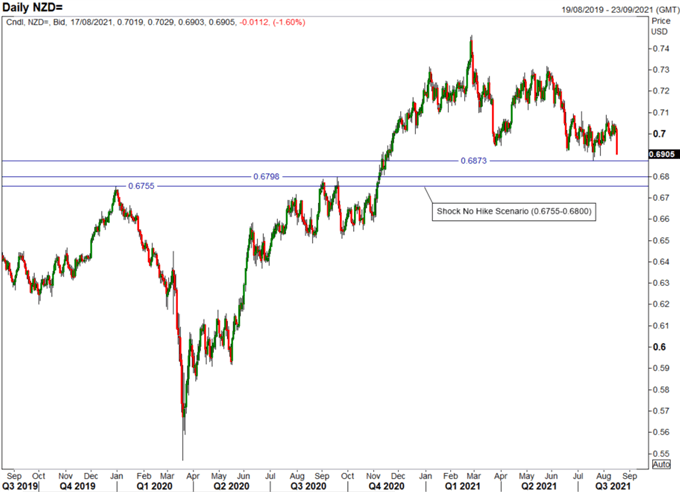