While the Chinese economy is vital to global growth and capital markets, New Zealand is particularly susceptible due to its economic and trade proximity. Additional easing actions from the PBOC may shore up support, but the central bank faces a difficult situation as it tries to balance easing measures against surging prices. Consumer and producer prices remained elevated in July, according to government data released this week. CPI rose 1.0% on a y/y basis, while PPI increased at 9.0%, both beating analysts’ estimates.

Tuesday morning, New Zealand reported electronic retail card spending data that provided insight into the retail sector. Card spending for July increased 0.6% on a m/m basis, down from 0.8% in June. On a year-over-year basis, card spending rose to 4.7% from 4.0% the month prior. The data shows the Kiwi economy is performing well domestically as consumers spend money.

However, overall, considering the newfound pessimism for the economic outlook in China, the New Zealand Dollar may remain capped near current levels. Still, Kiwi bulls may be able to take advantage of the situation. The Australian Dollar typically displays a higher correlation with China’s economy, which can open the door for AUD/NZD to underperform. Australia’s ongoing lockdowns as it battles Covid outbreaks serve to bolster the premise behind that position.

NZD/USD has quickly surrendered gains seen from a Falling Wedge breakout that occurred last week. Prices may fall further to test the wedge’s former resistance level, which is not untypical following these moves. However, a break below that former resistance, if it does occur, would put a more bearish spin on the outlook. Alternatively, bouncing from the same level could reopen the door for an upside move. 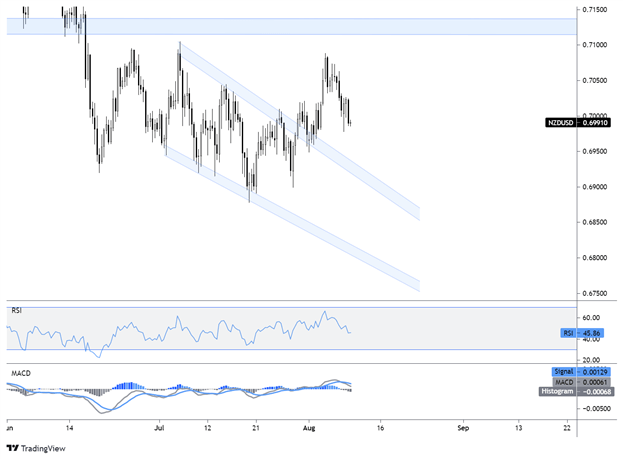