The New Zealand Dollar is benefiting from a second day of risk taking in global markets as concerns over the Delta Covid variant subside. New Zealand’s July balance of trade crossed the wires at -NZ$402 million this morning, down from +N$245 million in June. Exports fell to N$5.75 billion from $5.96 billion, and imports rose N$6.16 billion from N$5.71 billion.

This morning’s data showed a souring sign for New Zealand’s economy. The fall in cross-border trade is likely due to its regional trading partners suffering from consumption crippling Covid restrictions, like those seen in Australia. Moreover, New Zealand is seeing a domestic Covid outbreak, which is primarily centered around the city of Auckland. The city is under a level four lockdown until at least August 31. RBNZ rate hike bets have ebbed as the Asia-Pacific region grapples with the Delta strain, evidenced by a drop-off in the 1-year overnight swap. 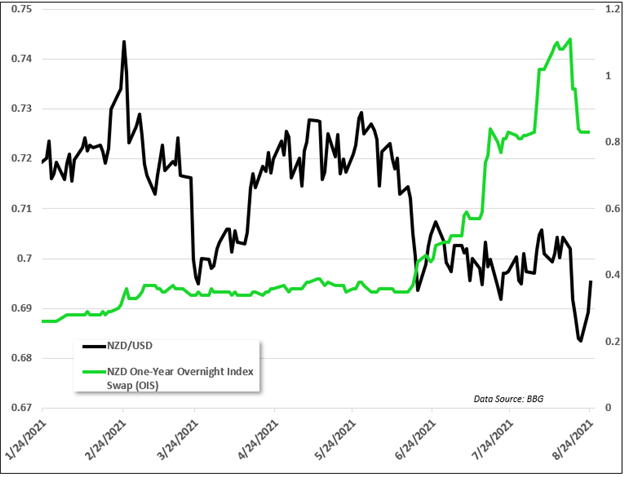 That said, the move higher in NZD/USD is likely more the product of US Dollar weakness than a reflection of underlying NZD fundamentals. The broad-based DXY index dropped overnight as risk-on flows disadvantaged the safe-haven Greenback. Comparing the New Zealand Dollar to the commodity-linked Canadian Dollar highlights the disparity, with NZD/CAD moving lower.

Speaking of the Canadian Dollar, oil prices saw a big move higher as the outlook for economic growth bolstered the demand-sensitive commodity. WTI crude oil futures rose nearly 3%, extending gains from the prior session. The global benchmark Brent oil put in a 3.45% gain during the same period.

Outside the optimism over Covid, recent messaging from the People’s Bank of China (PBOC) likely underpinned the bullish shift in sentiment. On Tuesday, the Chinese central bank released a statement that pledged “appropriate money growth” to keep the economic recovery sustained. The move follows some slowdowns in the powerhouse economy, including softer credit growth in recent months.

NZD/USD continued higher overnight from a Bullish Engulfing candlestick, which marked the end of a bearish move seen last week. The currency pair is now within 0.50% from its falling 50-day Simple Moving Average (SMA), which may provide resistance. However, upside momentum appears to be leveling off with the MACD oscillator’s histogram decreasing in value. 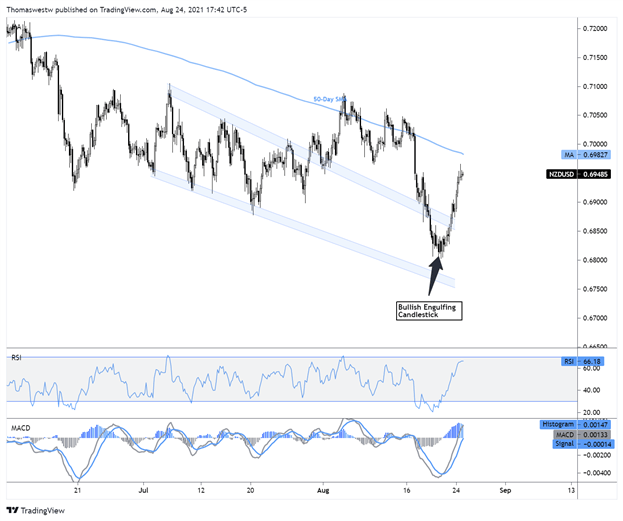