Wall Street stocks ended broadly lower on Tuesday, with cyclically-oriented consumer discretionary (-2.31%), materials (-1.21%) and industrials (-1.06%) leading the decline. Defensive-linked healthcare (+1.12%), real estate (+0.14%) and consumer staples (+0.04%) outperformed. This may be attributed to profit-taking after the release of US retail sales growth figures, which fell largely short of market expectations.

US retail sales contracted 1.1% MoM last month, compared to a -0.3% estimate. This suggests that the stimulus– and reopening-fueled economic rebound is probably losing steam. A automobile supply shortage and Delta variant may have also contributed to the decline, pointing to tepid growth outlook in the third quarter. This gave traders a valid reason to offload some unrealized profit, pulling indices from their record territory.

Looking ahead, investors are waiting for the release of FOMC meeting minutes for details about the Fed’s take on inflation and labor market conditions. Although minor changes may be observed from the previous month’s version, market participants are still keen to find clues about when the Fed plan to start tapering.

Chinese equities listed in the US exchanges tumbled again after Beijing ramped up regulatory clampdowns. The USSEC imposed stricter rules on Chinese IPOs earlier this week. Alibaba, Baidu and JD.COM were among the worst performers.

Asia-Pacific marketslook set to open on the backfoot. Futures in mainland China, Australia, Hong Kong, South Korea, Taiwan, Singapore and India are in the red, whereas those in Japan, Malaysia and Thailand are in the green.

Looking ahead, the RBNZ interest rate decision lead the economic docket alongside UK and Eurozoneinflation data. Find out more from the DailyFX calendar. 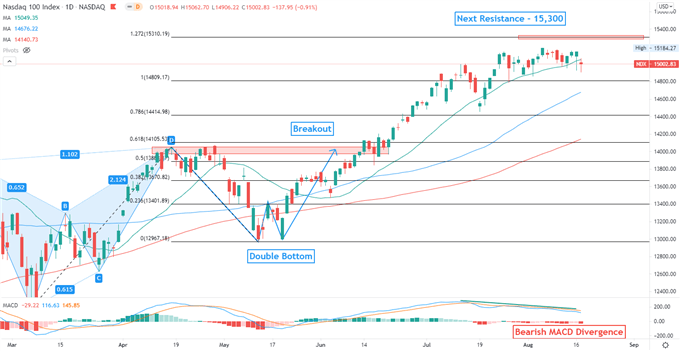 The Nikkei 225 index remains in a “Descending Channel” formed since February. The floor and ceiling of the channel may be viewed as immediate support and resistance levels respectively. The overall trend remains bearish-biased, as suggested by the downward-sloped SMA lines. The MACD indicator formed a bearish crossover beneath the neutral midpoint, suggesting that selling pressure may be resuming. 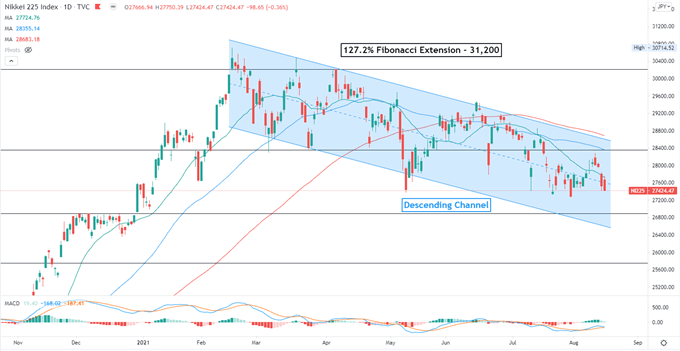 The ASX 200 index pulled back sharply to test an immediate support level at 7,500 – the previous resistance. The overall trend remains bullish-biased, as suggested by the consecutive higher highs and higher lows formed over the past few months. The MACD indicator formed a bearish crossover after hitting the trendline resistance, suggesting that selling pressure may be prevailing. 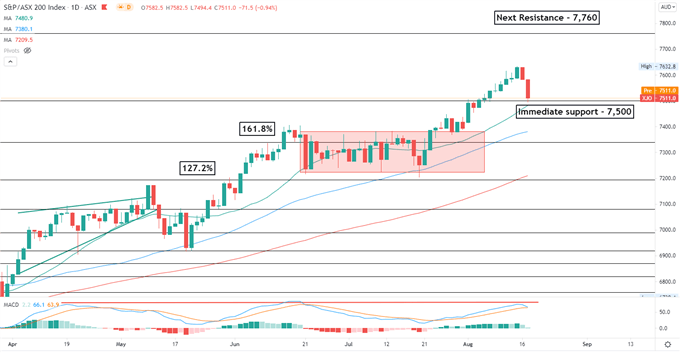 To contact Margaret, use the Comments section below or @margaretyjy on Twitte