Gold prices moved higher following the Federal Reserve’s interest rate decision Wednesday. The Fed opted to begin tapering asset purchases, a move analysts have speculated over for months now. Bullion prices gained in response as the US Dollar moved modestly lower. That was a reversal to the Fed announcement lead up when gold prices were falling.

The pullback in the Greenback was the most evident driver for XAU strength. The DXY index fell overnight despite a pickup in Treasury yields. The short-end of the curve failed to keep pace with faster rising 10- and 30-year yields. That represents a steepening of the yield curve, which may suggests markets largely interpreted the FOMC’s move as dovish – or at least less hawkish than markets expected.

That helps explain some upside in gold prices, along with the softer US Dollar. Rate hike bets remained virtually unchanged following the taper announcement from where they were prior. However, this Friday’s US job report may bolster rate hike bets if the headline figure impresses. That would more than likely weigh on gold prices, as higher rates discourage investors from holding the non-interest-bearing asset.

Analysts expect the NFP report to cross the wires at 450k for October. That is more than double the 194k September print. A better-than-expected figure will strengthen the Fed’s progress in hitting its dual mandate (inflation is already well above target). Alternatively, a poor print on Friday is likely to do just the opposite, which would help gold. Tonight will bring initial jobless claims data. That will provide the last data print before Friday, making the figure a potential mover for gold before the main event.

Gold is nearly half a percent higher overnight, but prices remain down on a weekly and monthly basis. Bulls will look to clear the confluent 20- and 50-day Simple Moving Averages (SMAs) before taking aim at the October high. The 26-day Exponential Moving Average is also adding a layer of confluence to the SMAs. Alternatively, failing to break those levels could see gold add to its weekly loss. 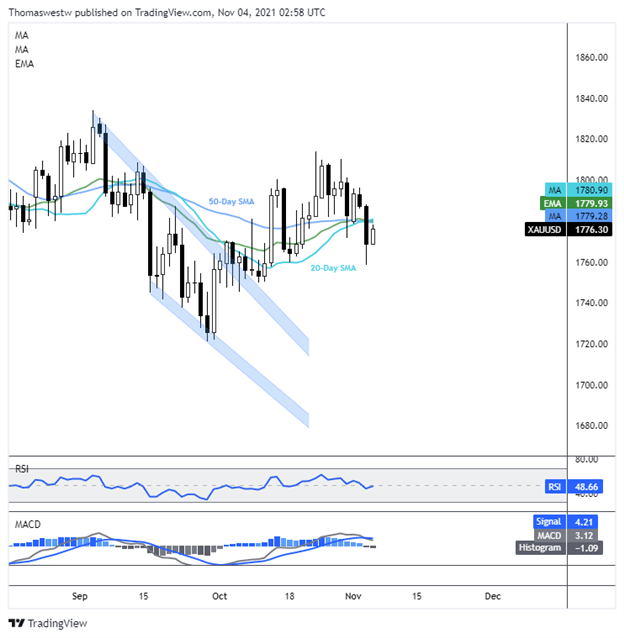