Asia Pacific trading hours had a tumultuous day after a series of oscillating developments in US-China trade relations. After relations suddenly took a hit at the beginning of the week, markets were roiled with major equity indices shedding gains between 1-3 percent amid fears of a collapse in trade negotiations. Beijing and Washington will continue talks tomorrow against the backdrop of a 15 percent increase on Chinese imports.

US-China trade relations will likely continue to remain a headline risk because of the implications for world growth prospects. Major institutions including the IMF and WTO have cited the trade war as a leading cause in global deceleration and has been applying pressure on emerging markets and other cycle-sensitive assets.

Sterling will be watching tomorrow’s release of UK GDP, though the impact of the data on GDP may be limited by the Bank of England’s monetary policy against the backdrop of Brexit. Despite the BoE’s hawkish disposition, the central bank is continuing to cater its monetary policy around the outcome of the UK-EU divorce.

Because the outcome of Brexit will likely carry with it significant implications for the UK’s growth prospects, the BoE is hesitant to make any adjustments in policy until the outlook is clearer. A similar dynamic of monetary policy being strongly influenced by a political outcome is also being seen in Brazil. In the meantime, GBP’s price movement will likely continue to be driven primarily by Brexit-related risk.

In Europe, French and Italian industrial production will be published with expectations of negative readings for both countries. Both Eurozone member states are undergoing tough domestic conditions that are weighing on local growth. France’s yellow vest protests are continuing to weigh on sentiment and are pressuring French president Emmanuel Macron to adopt fiscal measures that may have longer-term destabilizing effects.

In Italy, populist Deputy Minister Matteo Salvini and Luigi di Maio are continuing to test the resolve of Brussels by pursuing their controversial budget deficit that will likely result in another spat with EU officials. The last time Rome and Brussels had the battle of budgets, the spread between Italian and German 10-year bond yields widened over 100 percent. Year-to-date, they have not recovered.

The disparity between the two is the result of a greater trepidation of lending to Rome over Berlin due to the former’s precarious economic prospects. Despite downward revision of growth prospects, Salvini pledged earlier this week to implement tax cuts even if it violates the deficit limitations. Such fiscal-rule bending is likely to be amplified after this month’s European Parliamentary elections. Europe is in the endgame now.

Why are the upcoming EP elections the most consequential European-wide vote in the EU’s history? Be sure to follow me on Twitter @ZabelinDimitri to receive my European Parliamentary elections guide and outlook.

US CPI will be in global crosshairs following the most recent FOMC meeting when Fed Chairman Jerome Powell alluded to less-than-optimal inflation conditions being “transitory”. Powell’s comments at the last FOMC meeting surprised markets because of the comparatively less-dovish outlook he outlined. Monitoring the upcoming CPI will be key because of its potential to tilt the balance policy more toward a hike than a cut. 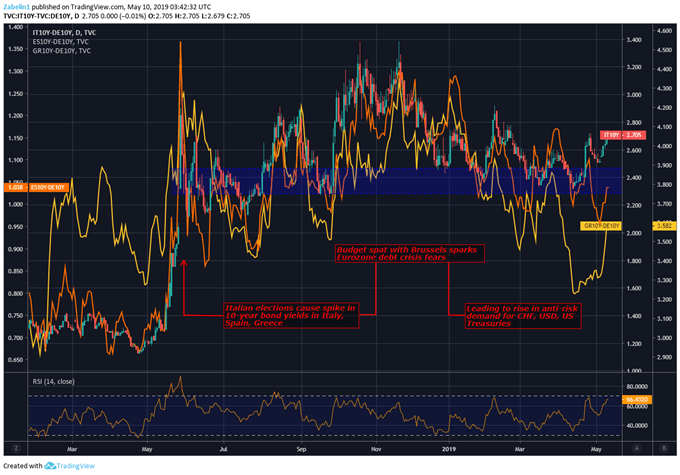