Evergrande appears set to survive another round of default fears, as the distressed property giant managed to make overdue payments to holders of offshore dollar bonds. Market participants were no doubt following closely to see if the $148.1 million of outstanding payments would be made before the end of the “grace period” on Wednesday. The bonds in focus are a 9.5% due in 2022, 9.5% 10% bonds due in 2023, and a 10.5% bond due in 2024.

This scare is not the first time Evergrande has missed payments and used up most of the afforded grace period, with a similar payment being made in October. Despite the short-term ease of default fears, trouble remains for the company with over $300 billion in liabilities still outstanding. Evergrande isn’t alone in its struggles, as other developers in China struggle with similar issues after years of expanding via leverage. Currently, the yield on high-yield dollar bonds issued by Chinese companies stands at a whopping 24%. 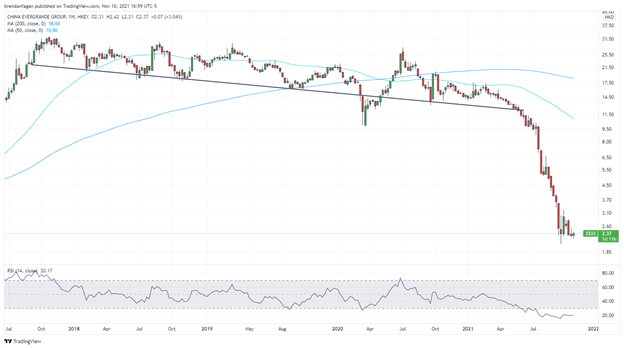 Perhaps even more worrying was the commentary from the Federal Reserve in its semi-annual financial stability report. In the report, the Federal Reserve highlighted the risk that weakness in China’s financial markets could spill into U.S. markets. Specifically, the report stated that “stresses in China could strain global financial markets through a deterioration of risk sentiment, pose risks to global economic growth, and affect the United States.” Despite these risks, U.S. equity indices sit perched just below all-time highs as corporate earnings continue to buoy sentiment.