A modest pullback across the oil space with Brent crude futures briefly below $80/bbl. Firstly, Russian President Putin stated that Russia could export record volumes of natural gas to Europe in order to stabilise the energy market and thus easing concerns over the ongoing energy crisis. The Deputy PM, Novak, also weighed in by noting that a quick certification of the Nord Stream 2 natural gas pipeline could be one way to export more natural gas.

Elsewhere, the US Energy Secretary raises the prospect of the US releasing oil from its strategic petroleum reserve, while also not ruling out the possibility of a crude oil export ban. Overnight, Goldman Sachs noted that a release of the SPR to the tune of 60mln barrels could see downside risks of $3/bbl to their current forecast of $90/bbl. The release of crude oil via the SPR, is seemingly a repeat of the playbook used by Trump, back in 2018. Now, that is not to say we will see a similar-sized pullback in oil prices, but it does take the shine from the current overly bullish narrative.

WHAT IS THE STRATEGIC PETROLEUM RESERVE?

The SPR is the world’s largest oil stockpile, which holds around 660mln barrels of US crude. According to the Energy Department, it is predominantly intended to be used in the event of a war (2011 Libyan War) that disrupts global oil supply or following a natural disaster (hurricanes) so that the US economy would be protected from supply shocks in times of tightened supply. However, non-emergency sales can be authorized in order to respond to minor supply disruptions or to raise federal revenue.

Taking a look at the chart, the current trend has been defined by the short-term moving average (20DMA) at $77.33 and thus should we see a break below the weekly open ($79.30), this would be the area to watch out for, whereby a close below may see longs begin to exit. 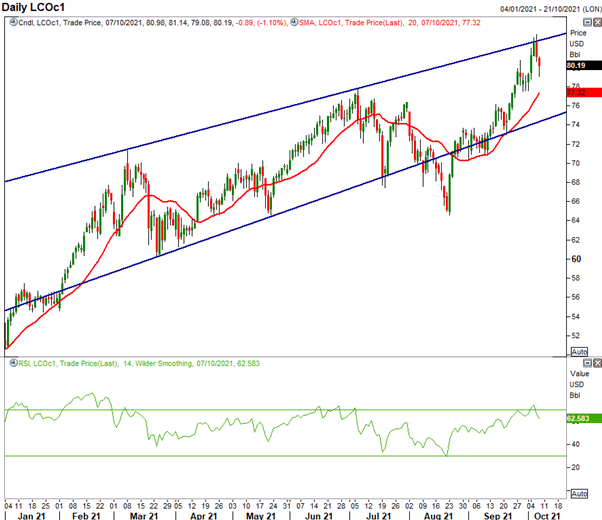