Crude oil, copper, and iron ore prices are down this week as a wave of risk aversion moves through global markets. Investors took their foot off the gas on risk assets and other cyclically sensitive assets starting in Monday’s APAC session. Crude oil and copper benchmarks are down over 1% on the week, while iron ore is over 4% lower. At the same time, the US Dollar is up nearly 0.5% via the DXY index. A stronger Greenback makes commodities priced in the currency more expensive.

The spread of the highly transmissible Delta variant has degraded economic growth forecasts in recent weeks. This follows a trend in economic data missing analysts’ estimates from mid-summer onward. That likely contributed to safe-haven USD bids, as downbeat economic prints fueled growth concerns. This could be seen in the chart below, which shows the global Citi economic surprise index versus the DXY index. 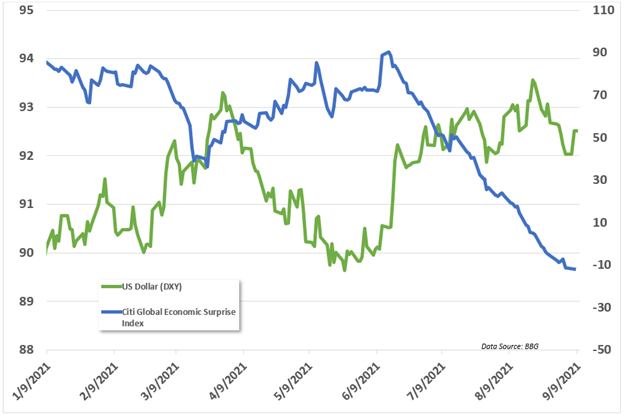 Investors in the US came back from an extended weekend with a more pessimistic market view after digesting last week’s downbeat jobs numbers. The US labor department reported a paltry 235k jobs added for August. That missed the consensus forecast by half a million and was the worst print since December 2020. Fed fund futures show rate hike bets eased from the week prior for the June 2022 FOMC meeting.

Meanwhile, the Asia-Pacific region is also facing Covid-induced growth worries. Australia continues to grapple with daily Covid case counts near record highs. New South Wales (NSW) and Victoria are in ongoing lockdowns that have economists forecasting economic contractions for the third quarter unless the state economies, which account for nearly half of Australia’s population, can quickly reopen. The RBA released a dovish policy decision on Monday when the central bank extended its timetable on purchasing assets onto its balance sheet.

China has also signaled troubling data that indicates Covid lockdowns in the economic powerhouse are impacting growth. Last week, the National Bureau of Statistics (NBS) reported PMI data that revealed the services sector entered contractionary territory in August. Manufacturing PMI also fell from the month prior but managed to stay above the 50 mark, which indicates expansion in the sector.

Trade data for August showed a more upbeat picture of the Chinese economy. Exports increased 25.6% on a year-over-year basis in USD terms. Imports also came in above analysts’ expectations. This week, analysts will be watching Chinese inflation data and new Yuan loans for August to cross the wires. Both events can have market-moving potential.

China is a major importer of iron ore, mainly from Australia and Chile. It also is a big copper consumer. While the trade data bodes well for the red metal and iron ore, the sporadic lockdowns have put pressure on the metals group overall. Copper imports fell for August, according to Chinese government data. However, imports of iron ore rose after falling for four consecutive months (see chart below). 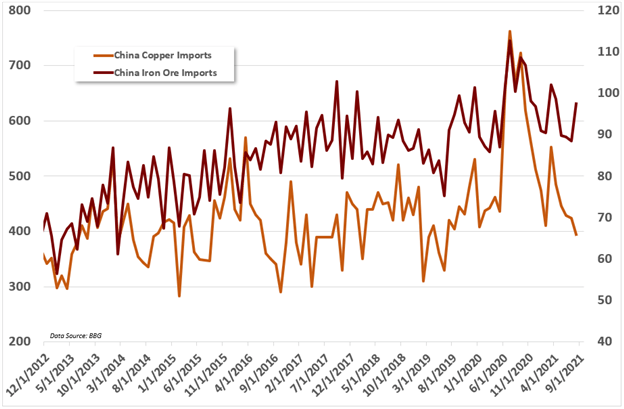 What to watch this week for Crude Oil, Copper, and Iron ore

Crude oil has been grappling with a trendline from the March swing low after rallying from resistance in late August. Prices attempted to eclipse the psychologically imposing 70 level at the start of September but failed. The 100-day SMA is providing a confluent level of support/resistance along with the trendline, with the falling 50-day SMA shortly above. That said, overcoming the trendline and SMAs may lead to a more bullish outcome for the week ahead. Alternatively, a drop back below the trendline could open the door for losses. 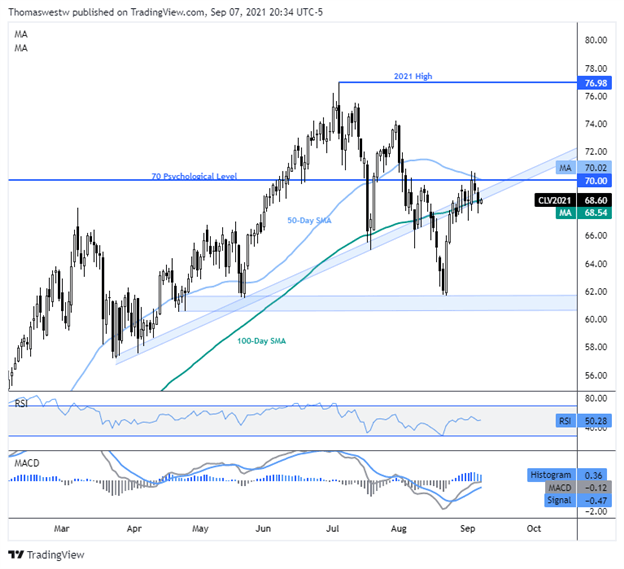 Copper prices are in a somewhat similar position to crude oil, with a rising trendline from the February swing low currently resting shortly above. Prices fell below the trendline at the start of this month, along with the 50-day SMA. A late August rally was turned back at the 100-day SMA. A drop lower will bring the 4.000 psychological level into view. Bulls will have to recapture the trendline to reestablish a brighter outlook for the short term. 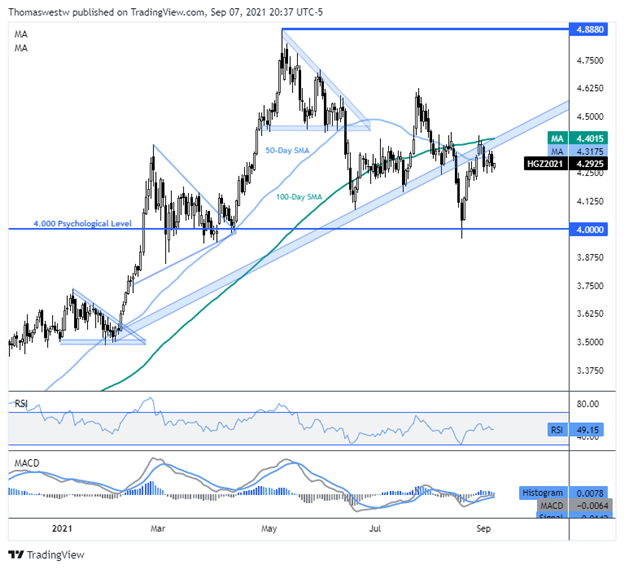 Iron ore’s troubles continue to mount on a technical basis. Since gapping below trendline support in late July, losses have accelerated. The falling 50-day SMA appears to be on the verge of making a cross below the longer-term 200-day SMA. This would generate a Death Cross formation and is a high-profile bear signal that may add more pressure to prices. 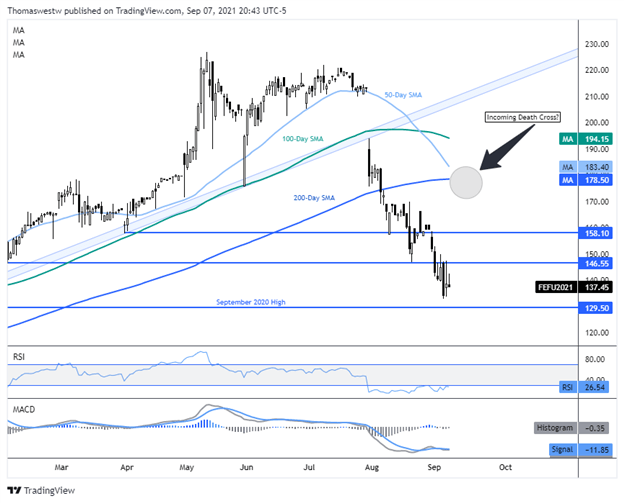