Australia and New Zealand have been lauded for their proactiveness with regard to lockdowns and restricting the spread of the coronavirus. The downside of sporadic, regional-specific lockdowns is that it that it tends to draw out the pace of a recovery – a necessary cost.

However, the Australasian neighbours have experienced drastic differences in their respective gauges of economic performance. The Reserve Bank of New Zealand stands ready to raise interest rates this week, which represents the first increase since the pandemic began, while the Reserve Bank of Australia does not anticipate any hikes before 2024.

Inflation has clearly been hard to come by in Australia and RBA Governor Lowe has been quoted saying he, “wants to see inflation above 2% for a number of quarters”. New Zealand inflation (consumer prices) for Q2 came in at 3.3%, drastically higher than their neighbours as RBNZ Assistant Governor Hawkesby has admitted that demand has proven to be more resilient than anticipated.

The labor market also warrants closer attention as lockdowns decimated jobs particularly in the restaurant and retail sectors. Impressively, Australia now boasts an unemployment rate of 4.5%, lower than the March and April 2020 readings of 5% and 5.2% respectively.

New Zealand reached a 4% unemployment rate, a level that Hawkesby refers to as, “maximum sustainable employment”.

The RBNZ has already halted additional asset purchases under the large scale asset purchase (LSAP) programme at the end of July this year and was poised to hike rates in August but chose to delay the decision. Expectations are firmly in favor of the 0.25% hike on October 6th bringing the official cash rate to 0.5%.

The Reserve Bank of Australia on the other hand has expressed caution over the developments of the Delta variant and expects growth to decline significantly in the quarter ending September 2021. As mentioned, it had exhausted it’s $200 billion of purchases under the bond purchase program but decided to continue purchasing government securities at a rate of $4 billion a week until at least mid-February next year.

The Australian dollar benefitted from the reflation trade but has come under pressure more recently. Speculative positioning as a percentage of open interest has the Aussie dollar at the bottom of the list when compared to major currencies, while the Kiwi dollar tops the same list as bullish sentiment climbs.

Looking at the AUD/NZD daily chart, there has been a sharp move off the bottom – which may be symptomatic of end of month profit taking but also presents the notion of a AUD/NZD reversal. That depends on whether the short AUD/NZD trade has been played out fully and if we see a closing in the gap on AUD and NZP positioning. Additionally, the retracement towards the 23.6% Fib or even the previous low at 104.20 may garner the attention of bulls looking for a bounce higher off these levels.

Until then, the bearish continuation remains a viable scenario as the stochastic suggests the recent bullish may be susceptible to exhaustion. Look out for a move back below the 80 level to further reinforce this narrative. 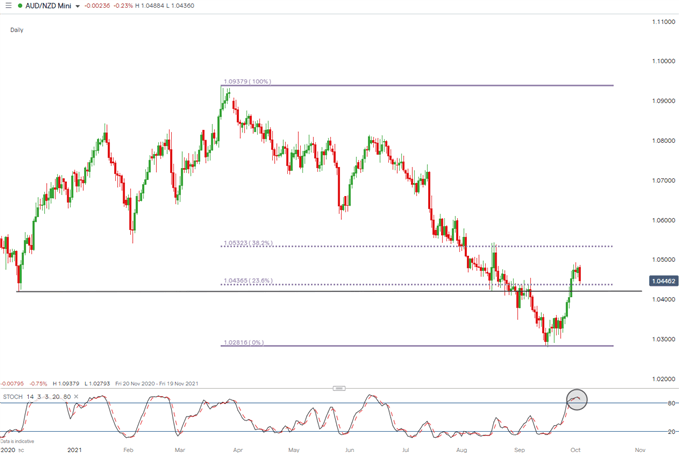