Sterling Has a Shot at Redemption

Surging inflation pressures and a Bank of England that proved to disappoint at its November policy meeting weighed heavily on the trio of Sterling commodity currencies crosses through the first two weeks of this month. However, the upcoming slate of UK economic data may soon help spark a turn higher for each of GBP/AUD, GBP/CAD, and GBP/NZD rates.

The UK economy has seemingly overcome recent upticks in COVID-19 infections as the economy has been opened full-tilt, and the outcome for the UK labor market has been a positive one according to consensus forecasts. And if UK inflation rates jump considerably like their American counterparts, speculation around the first BOE rate hike should be revived, which should help the British Pound recover from its early-month woes. 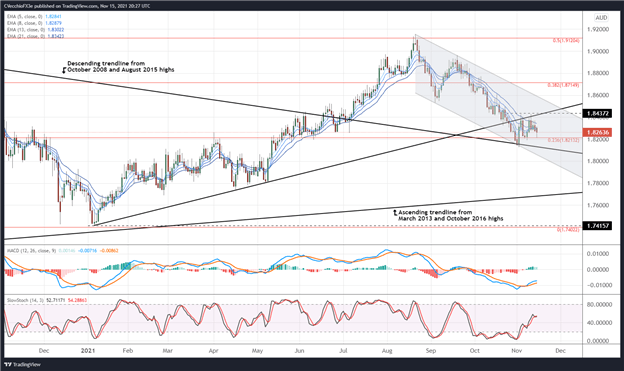 After losing their 2021 uptrend at the end of October, GBP/AUD rates have been rejected twice at reclaiming the multi-month trendline, treating former support as resistance. But price action through November has established a series of lower highs and higher lows, suggesting that consolidation is taking root.

Momentum is slowly turning more bullish for GBP/AUD rates, but the pair hasn’t ‘turned the corner’ just yet. GBP/AUD rates are still below their daily 5-, 8-, 13-, and 21-EMA envelope, which remains in bearish sequential order. However, daily MACD has turned higher and has been rising for six consecutive sessions, while daily Slow Stochastics have advanced through their median line.

The pair’s rebound today at the 23.6% Fibonacci retracement of the 2020 high/2021 low range at 1.8213, in the form of a hammer candlestick, hints that another attempt higher may soon arrive. A move above 1.8437 would clear out the November highs, as well as retake the uptrend from the January 2021 and May 2021 swing lows. 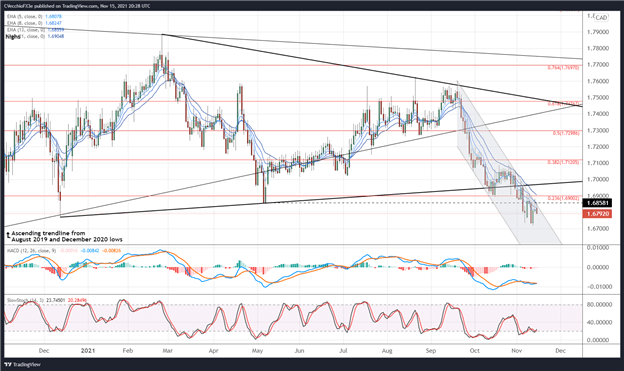 Last month it was noted that “GBP/CAD rates may be in the early stages of a more meaningful breakdown. The pair has recently exit the symmetrical triangle in place since November 2020, after having exited the longer-term symmetrical triangle measured against the descending trendline from the March 2018 and March 2020 highs and the ascending trendline from the August 2019 and December 2020 lows.” GBP/CAD rates hit a fresh yearly low soon after, and even carved out a fresh low just last week.

Among the GBP-crosses discussed in this report, GBP/CAD rates have the clearest discernible bearish bias. The steep descending parallel channel in place since mid-September remains in place, while the shooting star candlestick on the daily timeframe suggests that momentum remains to the downside after failing to climb into the daily EMA envelope – which remains in bearish sequential order. Another swing lower appears possible in the near-term; only a close above the May low at 1.6858 would invalidate the bearish perspective. 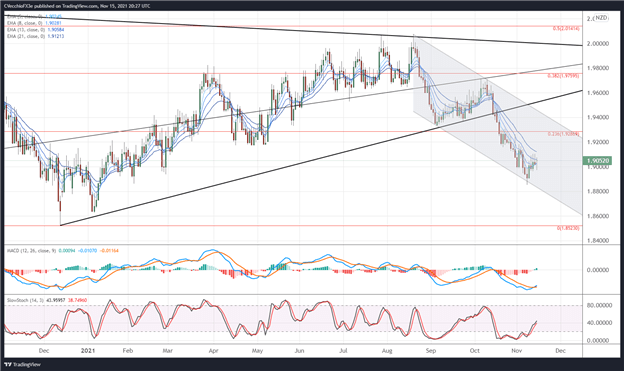 In the prior update, it was noted that “GBP/NZD rates have been in a symmetrical triangle since last August, but another test of trendline support from the December 2020 and September 2021 lows may soon arrive…the seeds are planted for a more considerable pullback through the end of October.” Having realized their bearish potential, GBP/NZD rates may be working on carving out a low now through the middle of November.

GBP/NZD rates have already started to climb higher into their daily EMA envelope, which is on the verge of losing its bullish sequential nature. Daily MACD has begun its turn higher (albeit still below its signal line), while daily Slow Stochastics have risen through their median line. A break above last week’s high at 1.9103 would offer a strong hint that a near-term bottom has been found.