By many measures, the past few months have been absolutely monumental for the crypto. Facebook, Samsung, HTC, among other technology giants have doubled-down on blockchain. Fidelity and E*Trade are both rumored to soon be offering spot Bitcoin (BTC) trading, as Nasdaq and the Intercontinental Exchange (through Bakkt) look to launch cryptocurrency futures. And big names in venture capital continue to throw their weight behind the industry.

All these industry developments would be deemed moot, if Bitcoin, or other cryptocurrencies for that matter, aren’t being used for their intended purpose. But blockchain data shows that cryptocurrencies are still being actively used, potentially confirming that the trifecta of indicator types — fundamental, technical, and quantitative (statistical) — are implying that BTC could soon rally.

In a recent edition of Diar Newsletter, the publication revealed that as per data from TokenAnalyst, real Bitcoin usage (sans change transactions) is starting to trend dramatically higher. While the count of BTC transacted on-chain in Q1 of 2019 is the lowest since Q2 of Q3 of 2017, Diar notes that as of the end of April, the U.S. dollar value of BTC and the number of BTC transacted is up three months in a row. 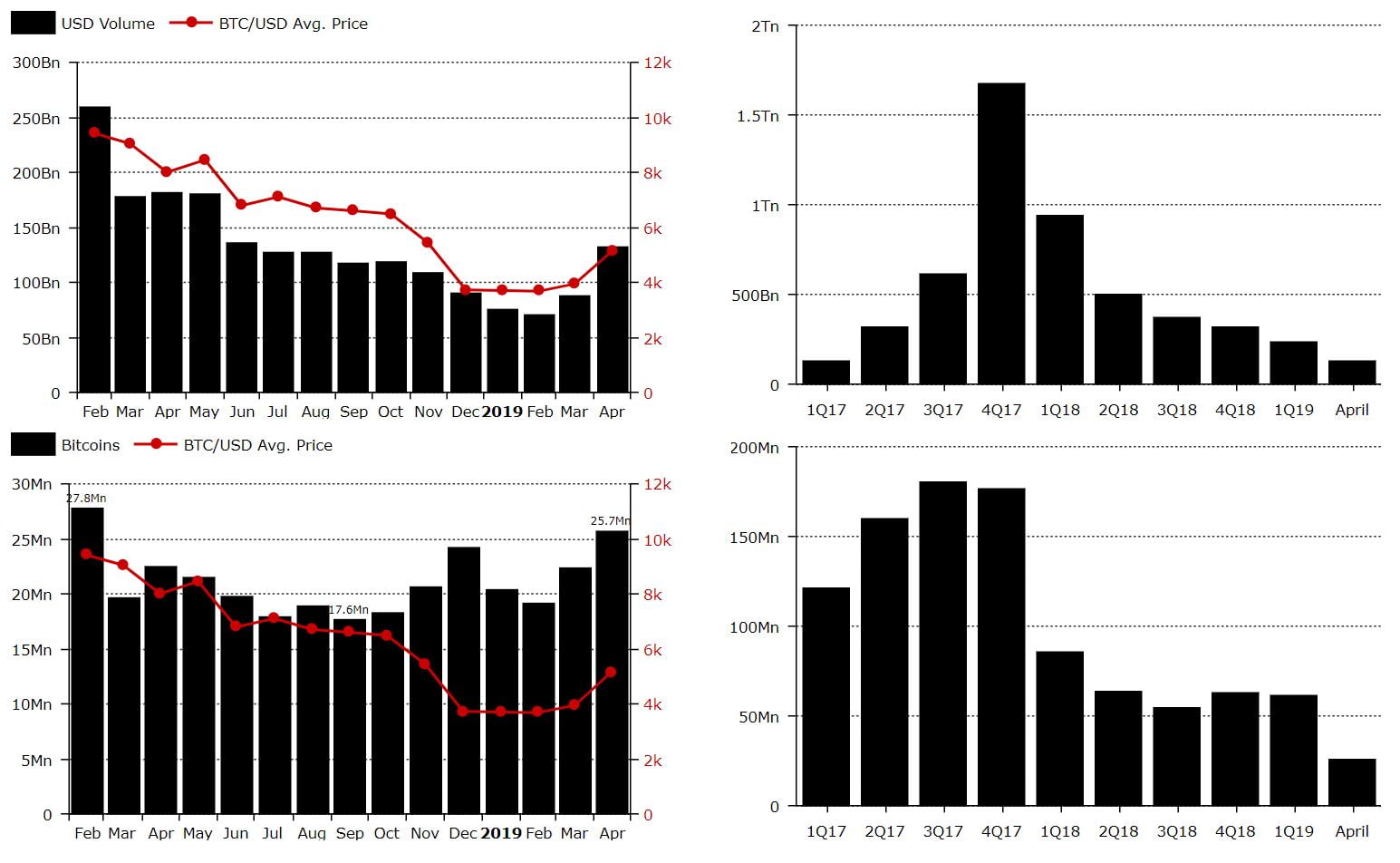 For some perspective, in February, $70.5 billion worth of value and 19.1 million BTC were transacted using the Bitcoin blockchain. These same indicators now read $132.6 billion and 25.7 million, respectively — an increase of 88% and 34.5% in a three-month time span. Explaining growth further, Diar’s editorial team wrote:

“Coins moved on-chain outpaced dollar value hitting a 14-month high in April. With a value of over $130Bn, the transaction volume closes in on June 2018 levels when the price of BTC averaged $7,000 – 35% higher than today.”

Diar postulates that this increase is primarily a result of increased speculative interest, but this does not null the fact that BTC is still being actively used as a decentralized, cross-border, low-fee, and censorship-resistant medium of exchange — one of its primary premises.

Related Reading: What Makes Bitcoin So Tantalizing To Own And Use? Industry Execs Weigh In

So what effect will this increase in on-chain volume have on Bitcoin’s price? According to researcher Willy Woo, who cites historical precedent, the surge in Bitcoin use and similar action in other statistics could indicate that the final bottom is in and that a bull run is on the horizon.

The investor, who recently revealed that he is 95% that a long-term floor for the crypto market was hit in December, noted that his Network Value to Transactions (NVT) Caps indicator, which aims to determine Bitcoin’s velocity of money, is currently looking as it did in mid-2015. If the NVT Caps sees a “fractal repeat,” BTC may near $3,150 (but not fall below) it, prior to embarking on a rally later this year.

NVT Caps starting to pinch gives us a clue to where we might be located in the current cycle.

In a later tweet, in which Woo drew attention to Bitcoin Network Momentum (on-chain volume), he noted that the indicator is currently hinting that BTC is preparing for a bull market with momentum. He adds that if on-chain volume continues to mirror historical precedent in a fractal, a “healthy volume level to support a bull market” could be seen by the second half of 2019.

Traditional indicators are also accentuating that if a bull run isn’t on already, one surely is festering. Long-term-centric trader Dave the Wave quipped that the “scariest indicator of all [is] looking a lot friendlier to the bull cause” in reference to the fact that Bitcoin recently bounced off its 50-day moving average, along with the fact that BTC has broken above a parabolic trend line that previously acted as a resistance. If Bitcoin continues to hug tight to the lines depicted on the chart below, Dave sees BTC setting a new all-time high by late-2021 or 2022.

Well, it never was [technically] in a bear market to begin with.😁 pic.twitter.com/9VTMmHctFC

And even in the short-term, Bitcoin’s prospects seem to be rather cheery. As astute trader JaminXBT notes, Bitcoin’s current one-day chart looks eerily like Litecoin’s one-day chart weeks ago. If Bitcoin’s price action plays out as Litecoin’s did weeks ago, BTC could soon rally to $5,600, and may even continue higher from there to new year-to-date highs.