Over a million internet users are visiting Binance every day as the cryptocurrency exchange manages a $40 million hack scandal amidst a bitcoin price boom.

Toronto-based Kevin Rooke, known for his insightful crypto-related social media analysis, revealed that Binance’s daily average traffic had gone up by 13 percent in April. At 1,183,000 visits, the Malta-based exchange was hosting its best website statistics since October 2018. The analysis appeared as soft evidence of people’s growing interest in cryptocurrencies, particularly bitcoin whose value surged by 29.33 percent during the April session.

Meanwhile, other cryptocurrency exchanges witnessed lesser website traffic compared to Binance. They were not even getting more than 400,000 hits a day, barring Coinbase, a US-based crypto exchange, which recorded an average of 930,000 visits every 24 hours. Coinbase offered services across 53 countries and worked under tight regional regulations. At the same time, Binance trading platform was available worldwide but catered fiat withdrawals only via Binance Jersey, a service it launched on February 18, 2019. The Binance and Coinbase’s latest traffic reports followed bitcoin’s co-called April Fools’ rally. On April 2, the cryptocurrency’s rate dramatically jumped by up to 24 percent. It posted similar bullish moves through the rest of the month.

The bitcoin buying sentiment rippled further into the early-May trading session. On the 9th, its price broke above $6,000, a historically significant support level during the asset’s downward action in 2018. The BTC/USD instrument today formed its yearly high towards $6,989.89 on Coinbase.

The bitcoin price booms typically coincided with an increase in the number of bitcoin-related keyword searches on Google – and even on China’s Baidu. Keyword ‘Bitcoin Price,’ for instance, continued to remain the most searched crypto-related query on Google. And interestingly, the search engine responded with a Coinbase URL on the top, alongside some of NewsBTC’s bitcoin price articles (big heart to our readers). 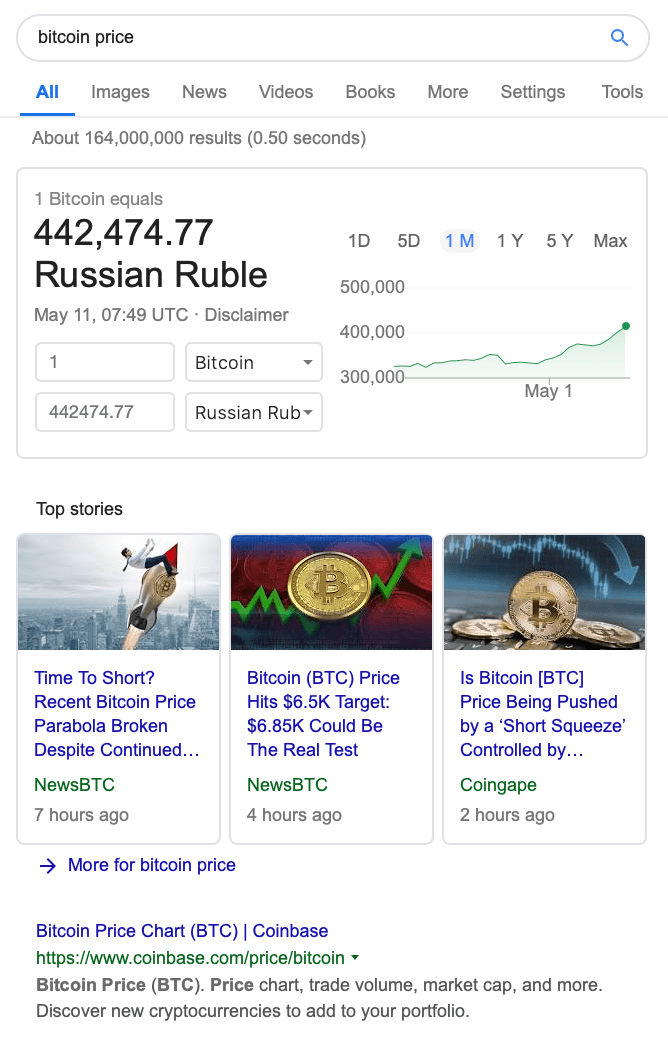 The high Google ranked at least one of the cryptocurrency exchanges at the top, which increased its visibility before the internet users. It is difficult to predict whether or not any of the new users converted into sales. No official data was available that could verify the number of account holders either on Coinbase or Binance as of now. At the same time, a report published in December 2018 stated that Coinbase had 422,000 daily active users, while Binance had 313,000.

It was likely for internet users to take an interest in a bullish decentralized asset, which explained how people could have landed on Coinbase or Binance either via referrals or directly. That doesn’t take away the fact that bitcoin’s on-chain activity surged alongside its price since December 15’s bottom formation.

At the time of this writing, the BTC/USD instrument’s year-to-date gains were 81-percent.