The Australian Dollar is dropping against most of its major peers into Friday’s Asia-Pacific trading session. Investors started to hit the sell button on the Aussie Dollar on Thursday after Australia’s capital city, Canberra, started a snap lockdown. Weakness accelerated overnight as US traders digested the news. The new lockdown will affect nearly 400,000 people. That adds to recent lockdown woes, with Sydney going into the seventh week of restrictions.

This morning, New Zealand saw BusinessNZ release its July performance of manufacturing index (PMI)at 62.6, up from June’s 60.7 reading. New Zealand doubled down on its zero-Covid policy this week. Prime Minister Jacinda Ardern said, “We’re simply not in a position to fully reopen just yet.” That said, the island nation’s strict border controls are likely to stay in place until next year. While that will likely hurt commerce and no doubt tourism, it will also allow New Zealand to more readily control the spread of any outbreaks, which could bode well for its domestic economy.

China is set to release data on foreign direct investment (FDI) for July, which could come as soon as today, although the data release may be delayed through August 18, according to Bloomberg. Foreign investment inflows to China have slowed through the prior three months, with June’s year-over-year change dropping to 28.7%. Still, in absolute terms, China’s FDI remains much higher this year than any on record as the economic powerhouse continues to make policy changes to attract foreign investment. Given Australia’s trade relationship with China, the Australian Dollar may be some underlying strength if FDI gains steam in July.

The Australian Dollar has extended a move lower after failing to break back above a prior level of support formed from a Rising Wedge pattern. MACD is also taking a turn lower, crossing below its signal line, a bearish sign. That may see AUD/USD continue to fall, perhaps to the 0.7286 level where the wedge pattern stemmed from. 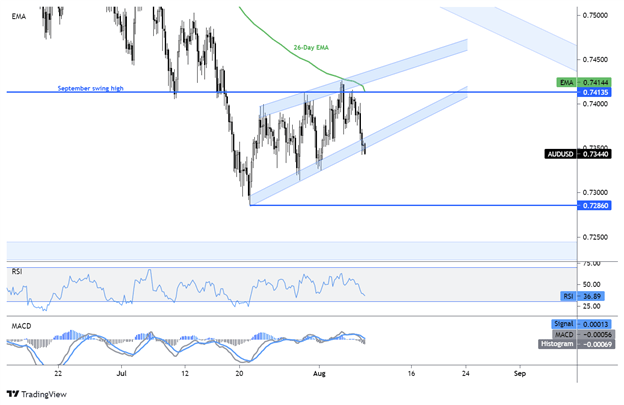