The risk-sensitive Australian Dollar was largely unchanged as Wall Street shifted out of technology stocks and into more cyclically-sensitive sectors. The S&P 500 and Dow Jones rose while the tech-heavy Nasdaq 100 index fell. Traders shied away from growth-sensitive equities as Treasury yields continued to rise. Volatility rose again via the S&P 500’s VIX “fear gauge” index.

Crude and Brent oil prices gained after President Joe Biden announced his administration’s plans to tap into the Strategic Petroleum Reserve (SPR). Oil prices fell in the past four weeks as rumors over the move swirled, which suggest traders already priced in the event given the upside reaction on the news. The Department of Energy (DOE) is set to release 50 million barrels in conjunction with China and other non-OPEC countries.

New Zealand will release an interest rate decision today at 01:00 GMT, which will serve as the Asia-Pacific region’s main risk event. The Reserve Bank of New Zealand (RBNZ) is expected to increase its benchmark rate by 25 basis points to 0.75% from 0.50%. NZD/USD is down on the month, but a surprise 50 bps hike, or a more aggressive rate hiking forecast can spur some upside in the currency pair.

Elsewhere, Singapore is set to release a final read on third-quarter gross domestic product (GDP) growth, with analysts forecasting a 6.5% y/y increase. Australia’s construction work done for Q3 will cross the wires. Japan’s Jibun Bank PMI figures for the services and manufacturing sectors will drop. Traders will also have their ears to the ground for commentary from the Reserve Bank of Australia’s Assistant Governor, Michele Bullock.

AUD/USD downside has eased over the past few session, with a break under the psychologically imposing 0.72 handle appearing less likely given the decreased downside momentum. However, the 20-day Simple Moving Average is on track to cross below the longer-term 50-day SMA, which may generate some bearish energy upon intersection. A break below 0.72 opens the door for attacking the September low. 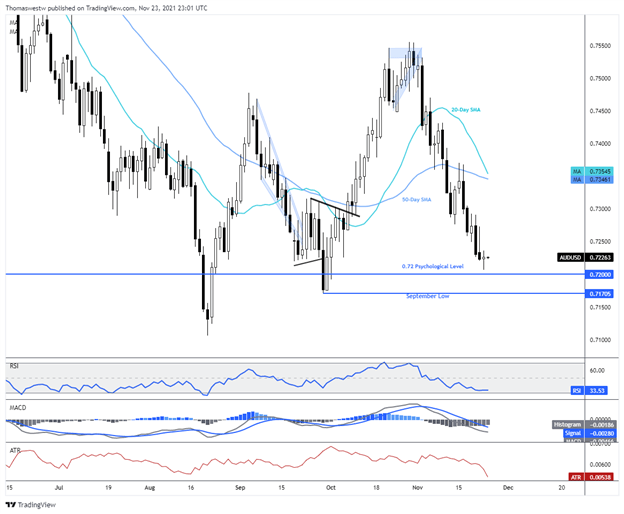