Australian equities may look to reverse their recent downtrend as economic data and a dovish central bank paint a rosier picture for the country than many expected. The ASX 200 and the Australian Dollar have been under pressure of late, mired by China weakness and a potential US default. Australia surprised market participants with trade data for August, posting a A$15.07 billion trade surplus. The jump in August represents a new record high for Australia’s balance of trade, well surpassing the expected decline to A$10.3 billion. Included in that release was a revision higher for July’s trade balance.

In data released from the Australian Bureau of Statistics, exports during August jumped 4.1% to A$48.5 billion. The large jump in exports was driven by insatiable demand for liquid natural gas and coal products, which helped offset the pinch felt from falling iron ore prices. Demand for commodities remains hot as China continues to face rolling blackouts amid a widespread energy crunch. Despite recent tensions between Beijing and Canberra, exports to China totaled a whopping A$18.6 billion in August.

Courtesy of the DailyFX Economic Calendar

The Reserve Bank of Australia (RBA) announced on Tuesday at its October policy meeting that it was leaving monetary policy unchanged, with the conditions for rate hikes not set to be satisfied until 2024. Bond purchases were also kept intact at A$4 billion per week. While vaccination rates continue to rise and lockdowns are slowly lifted, the continued dovish stance of the RBA could pave the way for a move higher in regional equities. AUD/USD declined on the release of the policy statement, as global appetite for risk appears to be relatively suppressed. 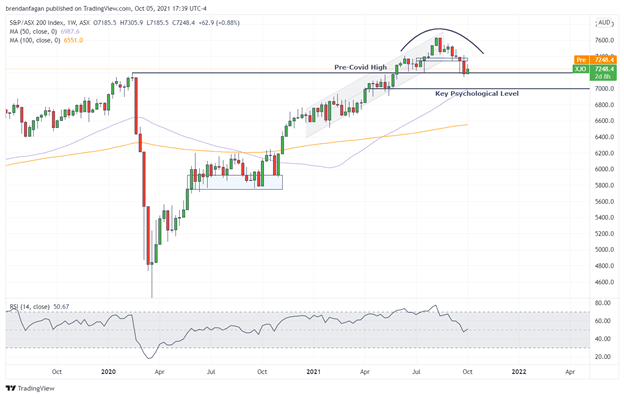 Despite the bedrock of a dovish central bank and improving economic data, Australian equities may remain under pressure in the near-term. Seasonality effects saw equities and risk appetite dimmish globally in September, with some of those effects still lingering. The decline in risk-on sentiment was echoed in AUD/USD price action, with the FX market’s “barometer of risk” getting hit hard over Evergrande fears, US debt ceiling anxiety, and the Federal Reserve moving ever closer to tapering.

On longer-term timeframes, the ASX 200 appears to potentially be rolling over. With a notable top put into the robust move off of the Covid-lows of March 2020, the Aussie index has retraced to a key level: the pre-pandemic high. With global sentiment continuing to wane as fears grow over China and the US debt ceiling, the ASX 200 may continue to trend lower. A break below the pre-pandemic high could see a retest of the psychological 7,000 level. A bounce on an improved fundamental outlook may see the index retest a key pivot zone around 7,350.