No. Way. Bitcoin (BTC) just hours ago moved above $6,700 and even flirted with $6,800 on some crypto exchanges. Although many have been absolutely enamored with this move, some have been left asking: Is the cryptocurrency moving too far too fast? Let’s take a look at some analysis.

Bitcoin Blips Above $6,700, Crypto In Disbelief

Over the past five weeks, Bitcoin has been in a decidedly bullish trend. Ever since the asset broke past the key $4,200 resistance level and its 200-day moving average, some, like Fundstrat’s Tom Lee, have proclaimed that BTC was in a “bull market”. 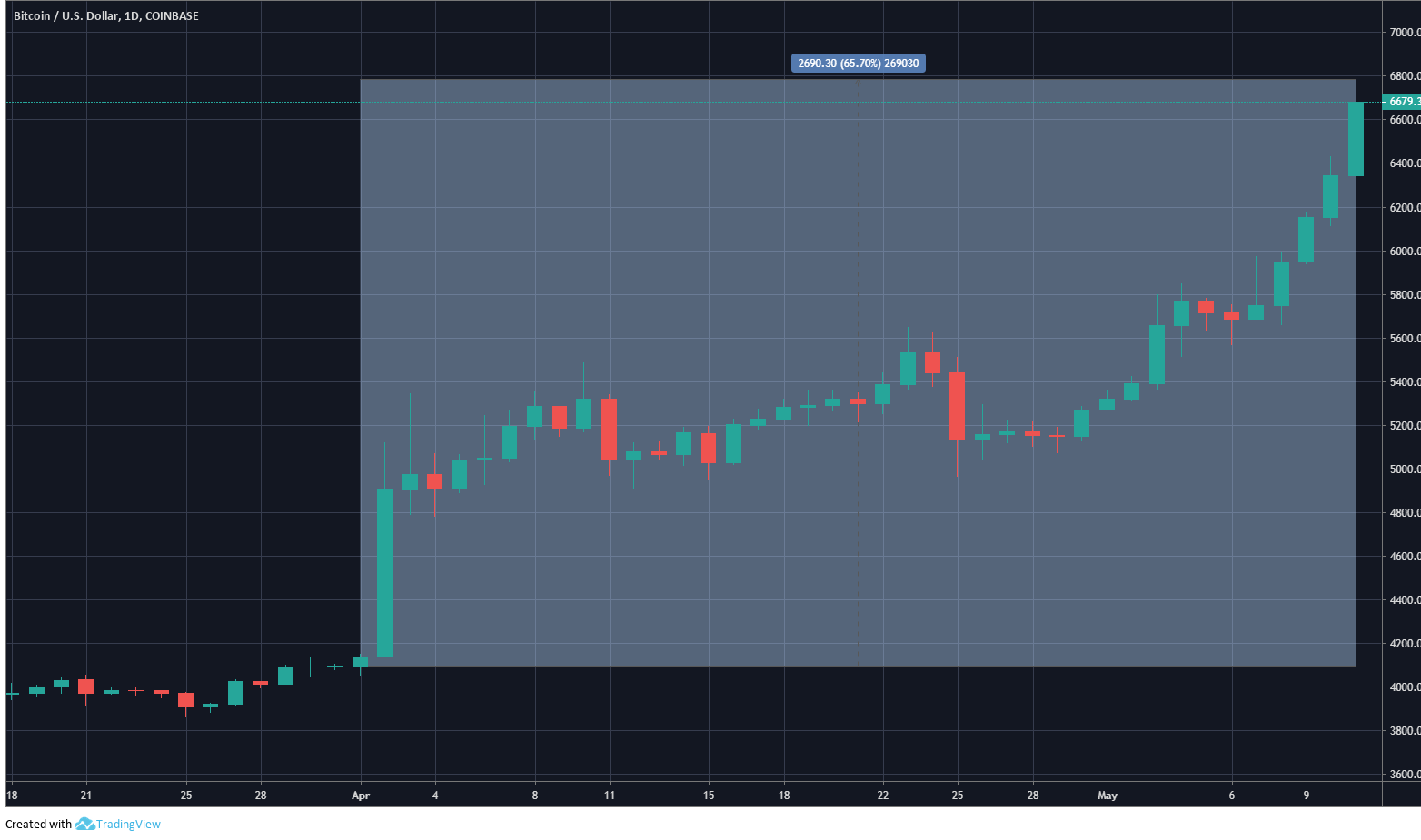 But few, very few, expected the digital asset class to move as fast it has in the past weeks. In the past month alone, BTC is up by over 50% — gains reminiscent of 2017’s rally. Yet here we are. And interestingly, a move even higher might just be in Bitcoin’s cards.

In a recent Twitter post, analysis “CryptoGainz” explained that there is an array of signs hinting that BTC won’t take a breather here. Firstly, there remains an open interest of $690 million worth of BTC positions on BitMEX, all while position funding has reached -0.09% for shorts. This, as Alistair Milne explained last week, could imply that a short squeeze is on the horizon.

As industry researcher Willy Woo remarks, if a short squeeze comes to life, BTC would see a “blow-off”, whereas prices explode within a short period of time, before a retracement. This is because such squeezes require short-sellers to “buy back at market price,” creating instant buying pressure.

The only indication of bitcoin *not* going on an omega tear tn is alts are not nuking yet pic.twitter.com/tUTISttTYp

What’s more, the “ask side” is “thin AF”, which means that minimal buying pressure will push the price even higher. And, most importantly, Bitcoin continues to break about key levels of resistance, namely $6,000, $6,400, and potentially $6,700-$6,800 most recently, in a sign that bulls do have both hands on the steering wheel… for now.

Bitcoin may not be ready to take on new all-time highs, however. Not yet anyway.

As PlanB, a popular quantitative crypto analyst, recently pointed out, BTC is currently trading well above the value that his stock-to-flow model, which has acted as a resistance in previous post-bear market recoveries, assigns to the asset. In fact, per his model, Bitcoin’s fair value sits at $6,250, but BTC is currently sitting 7% above that.

Technicals and historical price action, not just statistics, corroborate the (heresy) that BTC is currently overvalued in the short run. As Luke “VentureCoinist” Martin just drew attention to, BTC could “fade” in the coming hours, as $6,700 is where exactly BTC topped in a trading session in mid-October, when BTC suddenly spiked due and looked to break a bear trend.

A medium-term Fibonacci retracement model, which analyst Filb Filb looked to, shows that Bitcoin has reached the top of its range with the recent move, and could  thus settle around $6,500 in the coming days.

To summarize, if historical trends are followed, BTC could very well take a chill pill at $6,700. But if negative funding rates on BitMEX and Bitfinex reach high enough levels, a short squeeze could deem all the aforementioned analysis null.