Aluminum Prices Surge on Guinea Coup. Will This Last?

Aluminum prices recently jumped to a 10-year high after a coup in Guinea sparked fears of a supply disruption of bauxite, a critical ingredient used to produce the light metal. Head of Special Forces Colonel Mamady Doumbouya was behind the ousting of President Alpha Conde, and suspended the country’s constitution during the takeover. 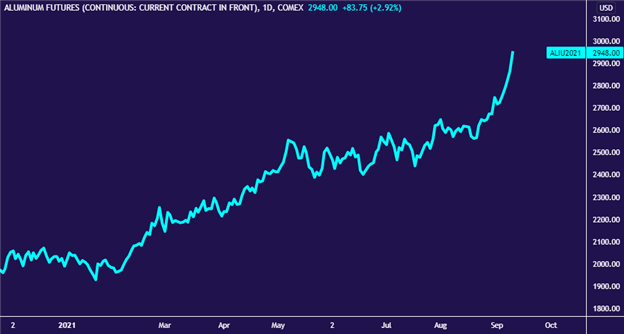 However, shortly after his takeover, Doumboyua went on television and announced that he intends on keeping land and maritime borders open for trade. He also urged mining companies to continue their operations and assured the population – as well as foreign investors – that all contractual agreements will be kept. This helped calm market angst.

As of this moment, there is no apparent record of a shipment disruption. Despite this, aluminum is now up nearly 48% for the year. Shares of select mining companies also benefited from the shock. Investors acted preemptively to capitalize on the rise in prices, and bauxite importers were likely eager to secure prices as quickly as possible before the situation deteriorated further.

This geopolitical shock amplified the global trend of elevated commodity prices, coming in large part from revived demand amid virus-induced disruption of global supply chains. Aluminum is the second-best performing metal so far in 2021. Only tin has fared better, adding over 65 percent. Having said that, the aluminum’s enthusiasm may be curbed by COVID-19 and Chinese demand.

With China as the largest aluminum producer in the world, it is hardly surprising that New Guinea accounts for more than half of Chinese bauxite imports. Over the past few years, Beijing has taken an aggressive approach to investment in Africa, hoping to secure key mineral mines and establish intra-continental supply chains.

Countries with the Largest Bauxite Reserves Worldwide as of 2020 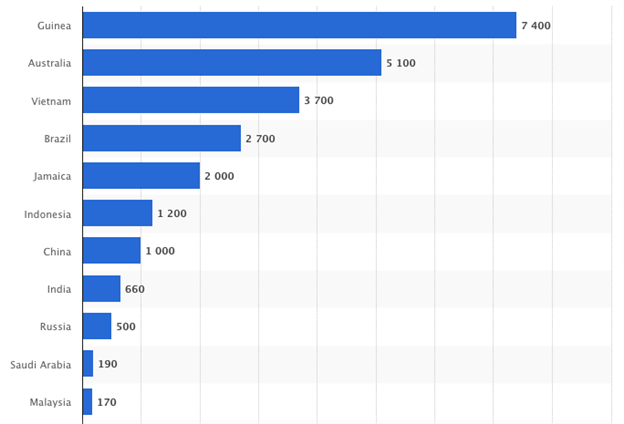 This is part of China’s broader strategy of building out infrastructure and stable supply chains not only in Asia – e.g. Belt and Road Initiative – but also abroad. However, Guinea is a particularly high priority. In the West African country, there is a 110 km range of hills called the Simandou. It purportedly holds the biggest reserve of high-quality, untapped iron ore.

There has been so much financial entanglement between China and Guinea over this, that the latter’s debt obligations to the former now equal 5% of its GDP. Securing this area is also particularly pressing as China’s tensions with Australia – currently the world’s largest iron ore exporter – remain unresolved as Canberra calls for an international investigation into the origins of the COVID-19 virus.

Australian mining companies and iron ore exporters would therefore be the beneficiaries of a politically-induced supply disruption for its biggest competitor. Having said that, supply is only half of the equation; the other is demand. The emergence of the potent Delta variant of COVID-19 continues to cast doubts over future global growth, including for powerhouses like China.

Iron prices have been falling and are hovering at an almost one-year low, in part due to this phenomenon. Domestic policy in China has also played a role. Officials in the Guangxi region – a major hub for the aluminum production – have called for smelters to regulate their output as a way of putting less stress on the energy grid.

Looking ahead, aluminum prices appear to have a bullish outlook given the political uncertainty in Guinea, disrupted supply chains thanks to COVID-19, swelling demand for commodities, and Chinese production-curbing efforts. The virus itself continues to be a major risk to demand however. Delta as well as the emergent “Mu” adaptation are especially concerning.

Preliminary evidence indicates this new variant is less infectious than the Delta one, though it may be more resistant to vaccines. How global officials will respond to its seemingly inevitable spread will depend on the number of attributable infections and deaths. The policies to emerge from this calculus will almost certainly influence commodity prices in a meaningful way.

Written by Dimitri Zabelin for DailyFX